​The integration and inclusion of international students at Bilkent University 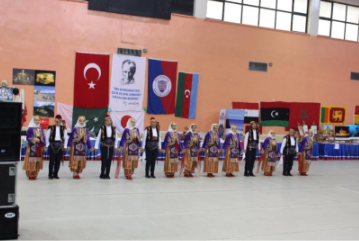 There are more than 100 student clubs at Bilkent University. Nonetheless, only 4 of those clubs
operate solely in English, with Bilkent International House (BIH) being the most active. The
president of BIH, Nausherwan Aziz commented “BIH uses English as the main language of the
club, as we want the club to be a bridge for everyone, and we recently started the language
learning initiative that aims to create an increased intercultural awareness, who are from 22
different countries”. Such initiatives are highly endorsed by the office of International Students
in Bilkent university.

Bilkent University, the first private, nonprofit university in Turkey, was founded in 1984 by
Prof. İhsan Doğramacı, with the aim of creating a center of excellence in higher education and
research. As of 2019, Bilkent University has 1160 international students, which represents 8%
of the student body, coming from 62 different countries. Bilkent University primarily uses
English as its main means of communication as well as for their curriculum. The majority of
the body in Bilkent was still Turkish-speaking, creating a slight integration problem for the

international student body in terms of social communication at Bilkent University. International
adapted and created their mark by the founding of student clubs that focus on the inclusion
between International and Turkish students, such as Bilkent International House (BIH), South
Asian Cultural Club (SACC), Erasmus Student Network (ESN), as well as implementing
supranational bodies into Bilkent such as the Bilkent Model United Nations Club (BMUN).

What about the education?
​
Bilkent University’s entire curriculum is English-based. However, there are two mandatory
classes for international students to take, that serve as the beginners’ classes to introduce them
to the Turkish language so they be further included in the University. Professor Zavagno, who
is a professor from the history department of Bilkent said “Maybe Bilkent could offer more
courses, as electives of course, for students who want to learn more Turkish. I know I would
take one of those courses if offered for professors”. This interest compels Bilkent’s International
student office to consider proposing intermediate Turkish language classes as a part of their
future curriculums.

Bilkent International Festival, hosted by Bilkent International House (BIH), records the highest
attendance for a student club’s event on campus!
Over 1200 people tuned in for BIH’s annual festival last April, with over 35 countries in
representation. The festival is a showcase of different countries’ cultures through trying out
different foods, various singing performances, as well as captivating cultural dance
performances performed by students, cultural centers, and embassies from represented
countries.